The Florida weather hit us with a vengeance with the temperature hitting 37 degrees Celsius so it really was scorching.

21st June was a short Animal Kingdom day to do the one FastPass we really wanted …… Avatar – Flight of Passage. On our way to use the FastPass we saw Kevin from Up! walking round the park meeting people.

Avatar – Flight of Passage is one of the newest rides at Animal Kingdom having been open just over a year, waiting times still hit the 3 hour plus mark so FastPasses are the best way to ride, and you have to book these as quickly as you can at the 60 day to go mark or you probably won’t get one. So much work has gone into making this ride the amazing experience it is, you sit on a ride vehicle which is a bit like a bike, pads come up behind you to hold you in. The ride is immersive and you really do feel like you are flying on the back of a banshee. We were sat at the end of a row and actually found it to be noticeable that we were on the end of something, it didn’t feel quite as immersive as when we had done it previously and were in the middle of the row.

Due to the heat we needed a refreshment stop so stopped at Pongu Pongu and both ordered a Night Blossom. This beauty consists of layers of apple and desert pear limeade topped with passion fruit boba balls, when they pop in your mouth you get the yummy passion fruit flavour.

On our way out of the park we stopped at two different Lion King photo spots, one inside the park and one just outside.

Once the heat eased off we headed to Blizzard Beach. We had a leisurely float around Cross Country Creek followed by a chair lift up the mountain to Teamboat Springs. We rode with a dad with his little girl and it was a fun filled raft ride down the mountain. I then decided to be a bit of a daredevil and decided I was going to try Summit Plummet, Beans went to the bottom of the slide to wait while I went back to the chairlift. After a bit of a wait it was my tern to hit the slide. It was exhilarating but for me painful, my speed registered at 41mph but unfortunately my swimsuit had other ideas and gave me a wedgie, which at 41mph and the water pressure caused a lot of pain.

22nd June was scheduled as a visit to Hollywood Studios with the H2O Glow Party at Typhoon Lagoon in the evening. There is a separate post about the Glow Party.

We were both excited as this was the first time we have been since Toy Story Land opened at Hollywood Studios and we had managed to get a FastPass for Slinky Dog Dash, one of the two new rides in this part of the park. However while walking through Toy Story Land Beans said he felt unwell due to the heat so was not going to go on the ride. He insisted I went on alone so I did. The ride is a rollercoaster around Andy’s backyard, there is Rex and Jessie along the way. It has some twists and turns but nothing too dramatic and scare worthy so fab for children. The ride train is Slinky Dog. 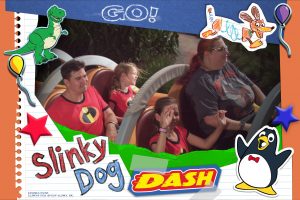 Once off the ride we walked back to Walt Disney Presents which highlights Walt’s life. There is currently also a model of Star Wars Galaxys Edge on display, which shows how this new land will look. The current film offering was a longer teaser trailer of Toy Story 4, the teaser was around 15 minutes long.

Once that was finished we decided as Beans was still feeling rotten from the heat we would go back to All-Stars and relax away from the sun.

On the way out of the park I met Daisy Duck who was meeting and greeting just inside the park entrance.