So the 16th of June equalled the big 38 for Beans.

For those of you that don’t know Beans, he doesn’t do birthdays.  He’s not fussed by cards, and to some extent gifts, and never really plans any way to celebrate!

However this year was a year of firsts.  Maybe it was the thought of being in Walt Disney World, but Beans was actually excited about his birthday.  We had both  had a crazy couple of weeks leading up to our holiday, with both Beans and I away from home for work, and very little time at home to pack.  Because of this our packing was mostly carried out on our last weekend at home and at the last minute, whilst discussing our room, Beans decided he wanted some decoration in our room.

more after the break…

Little did he know, I’d already made some plans along these lines, ordering some custom confetti from an Etsy shop called The Mousierge which featured his favourite film franchise ever, his favourite Disney character and one of our favourite Disney Rides: Star Wars, Stitch, and The Haunted Mansion.  I casually asked if he would want a Birthday Banner, which resulted in a shake of the head and no, or something to go in the Window of our room at All-Star Music, such as bunting.  This resulted in a consideration and a nod, followed by a yes.  I’d already seen some potential purchases, so showed him a design I’d liked earlier and got a yes!

The bunting was quickly purchased from an Etsy Seller called NerdDragonCrafts. I messaged the seller asking if the bunting could be made at short notice as I was going away on the following Thursday.  Jen from NerdDragonCrafts replied to say it could, with some small modifications to get this sent quickly.  This resulted in some decoration that would normally have been painted on would be stitched in felt.  I placed the order on Sunday, and they made it and shipped it on the Monday so we had it in time for out trip.  Amazing service and it looks fantastic.

The final piece of decoration was brought in Disney Springs on our first full day in WDW.  This was a light up Happy Birthday Mickey Balloon!  It’s safe to say Beans was very pleased. 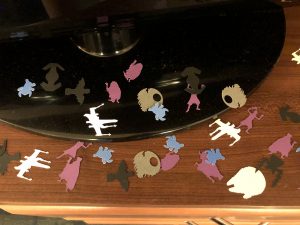 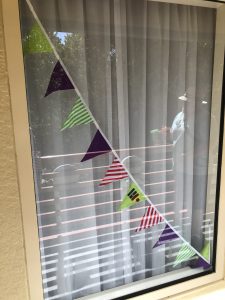 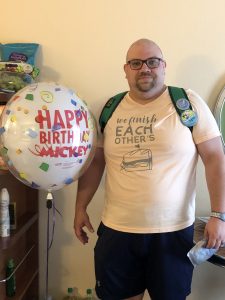 For the big day itself, Beans got to pick which park we went to and he picked his favourite park Epcot.

6Being the relatively experienced Disnerds that we are, and because we are staying on property, we’d actually made this choice 60 days ago so we could book our fastpasses as soon as they were released.  Our first stop was to The Norway Pavilion and Frozen Ever After.  Despite having been to WDW in 2015 and 2017, this was our first time on the ride since it had previously been Maelstrom.  Whilst some of the track felt familiar, with Beans remembering the boat going forwards and backwards, it was great to see the ride being Frozen themed, especially the Trolls and  Marshmallow’s Snowglies.  They are too cute!

Outside of Norway we had some PhotoPass pics taken, including one with a bit of Disney Magic for the Birthday Boy with some Balloons added. 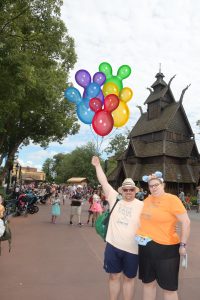 En Route to our next fastpass location, Mission:Space,  we decided to stop  off for a drink and a snack.  As we were walking through Mexico at the time, we stopped at La Cantina San Angel for a Coke for Beans, A Patron Loco on The Rocks for Me (who can pass up cocktails in Disney!) and some Guacamole with Totopos for a snack. 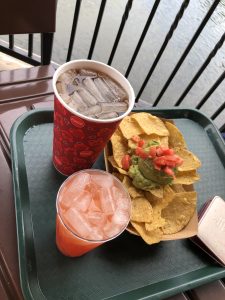 As a really nice surprise, one of the servers brought Beans some Birthday Churros for free!  More amazingly, he ate them, which is amazing considering doesn’t usually do sweet food things (unless it’s an Ice Cream Sandwich).

Once at Mission Space, we checked in for the Orange version of the ride because we’re hardcore (yeah right!).   If you’re not familiar with the updated Mission:SPACE, the Green and Orange experiences differ more than they used to.  Whereas before Green and Orange both journeyed to Mars, with Green having a gentler experience without spinning to create artificial G-force, now the Green ride orbits Earth, whilst the Orange ride goes to Mars.  With our queue picked, the briefing completed, we lined up to embark.  Beans was exceptionally pleased that he got to be pilot!

Following the ride, we had a quick debrief.  We both felt like we span more than usual, providing more G-Force on the chest.

Our last FastPass+ of the morning was Journey To Imagination starring Figment.  I know a lot of people say it’s not worth FastPasses but we went with it anyway.   This is one of those rides that we’ve always meant to go on and never got around to.  It was definitely a lot of fun, and Figment is such a fun character.

On the way across to Journey into the Imagination, we stopped at Cool Club.  One of the Cast Members in Mouse Gears had pointed out Birthday Boys get a free slushie.  Beans couldn’t pass this up and I think you’ll agree that his Frozen Coke looked delicious. 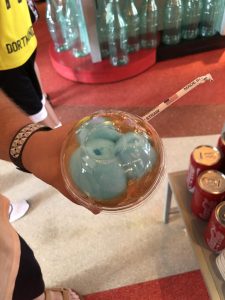 After Figment, we decided it was time for lunch, and wanting to find something Gluten Free for myself, we decided that Mobile Ordering from Electric Umbrella would be something to try out.  We’ve not tried Mobile Ordering before, and after using I can see why people rave about it.  The food in Electric Umbrella was great.  Beans was definitely pleased with his Mojo Pulled Pork Burger, and the Gluten Free Angus Bacon Cheeseburger was great too.  Whilst having lunch, we booked a cheeky bonus fastpass for Soarin’ in the evening.

Deciding that it was time to get out of the sun and avoid the lunchtime crush, we headed back to the resort for a little R’n’R.  Beans tried to do a little admin for Disnerdy, and I “supervised” by having a siesta.

The heavens decided to open about 4pm and they didn’t stop for the rest of the day so ponchos were needed for our evening outing.

In the evening it was back to Epcot for our dinner reservation at Le Cellier, but before that we had a date with Beans second favourite WDW ride:  Soarin’.  This was a favourite when it was Soarin’ over California, and loved just as much now it’s Soarin around the World.

After our flight, we dashed to Canada (we only had 5 minutes between landing and our reservation)!  If you’ve not eaten at Le Cellier, both Beans and could not recommend it enough.  It’s definitely pricy, it’s a signature restaurant so uses double credits if you’re on a meal plan.  However, for a special occasion it’s definitely worth it.  I’ll let Beans do the foodie review, as he was raving about his Oysters and Steak all night..

After that, we had a gentle walk back to the car as we were both full!

Think that’s it for birthday celebrations so I’ll sign off.
TTFN
Titch

One Reply to “Beans’ Birthday”