We are down to the last two full days of the holiday (26th and 27th June) and the wanting to stay had throughly kicked in, we still had a few things planned though so were determined to make the most of it.

26th was the last park day we had planned and we had picked Hollywood Studios to end in. I was feeling slightly under the weather due to a migraine but was not going to let it stop me. It did mean we didn’t head to the park until the afternoon, we had a pleasant walk down Sunset Boulevard, stopping for food at Fairfax Fare where we both had the 7-layer rice bowl with pulled pork.

Next stop was Beans most loved ride Star Tours, followed by a trip to the entrance of Galaxys Edge. Beans is the biggest Star Wars fan I know, we nearly had to change the dates of our holiday when they announced Galaxys Edge would be opening on 29th August. Beans tried to find a way in but had to settle for hugging the wall instead. 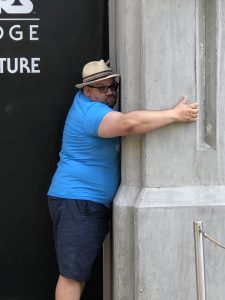 Next stop was Baseline Tap House which was being built last time we went. Beans had a speciality beer, I went for the Blue Sky Black Cherry Soda, we were both pleasantly surprised to find we got free refills. Beans also had the Coffee-rubbed Rib Eye Steak Puff with Olive salad as a snack.

We decided to go to Muppet*Vision 3D but sadly it closed at 6pm, it was about 6:10 that we got there. I was starting to feel rough again so we decided on one final ride of Star Tours then headed back to the hotel where we had a relaxing swim in the Piano Pool.

27th we had planned to spend the day at the hotel, enjoying what we had around us as well as packing, boo.

We had seen a sign about Tie-dye t-shirts and decided these would be a fabulous unique souvenir so went to the Calypso Pool to take part. You get given a slip saying what you have chosen to do and asked to go to the resort shop to pay. Our t-shirts were $17 each, once paid it was back to the pool where we were given our t-shirts and a lot of dye to play with. The t-shirts are pre-banded so you get a Mickey head in the middle of the front. Once done we were given the news that they shouldn’t be washed for a minimum of 48 hours to allow the dye to take and they were wrapped in cling film to stop them from dying everything. We both wrapped them in multiple carrier bags in the room ready to go in our suitcases.

As it was Thursday we had a quick look at the Food Trucks that had arrived at the resort, every Monday and Thursday in good weather is Food Truck night at All-Star Music, we didn’t get any food from them as we were headed to Disney Springs where Beans had booked to have a shave.

In Springs the first thing I had was a Imagination Pink Churro, all churros in Disney are gluten free which made me very happy. We then went to Paradiso 37, Taste of the America’s for a Margarita and a beer before Beans had his shave.

The shave was booked at Art of Shaving and Beans went for the full on pamper treatment, I got to sit down and watch, which was fascinating. I may have had a good view of the barbers bum too, whoops.

After a final stroll in World of Disney we decided to stop at Chicken Guy for some food as we were both impressed with the food there then it was back to the hotel to finish packing.

28th was our travel home day, we took our hire car back to The Swan and Dolphin and got a Lyft back to All-Stars to await our Magical Express to MCO. As usual I cannot fault the Magical Express, it was a comfortable ride back to the airport ready to return to reality.